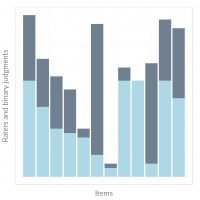 Posted at 15:57h in Inter-rater reliability, R-code by janajarecki

If you want to obtain inter-rater reliability measures for dichotomous ratings, by more than two raters, but not all raters rated all items, Fleiss and Cuzick (1979) will be the referece you’ll find. For example, we asked researchers which model they consider a process model (dichotomous rating), and we asked about 60 researchers (more than two rater), of whom not everyone was familiar with every model (not all raters rated all items).

They proposed a measure between a minimum value and 1. Here is an function to calculate their kappa measure in R.

If there is no intersubject variation in the proportion of positive judgments then there is less agreement (or more disagreement) among the judgments within than between the N subjects. In this case kappa may be seen to assume its minimum value of -1/(n-1)

If the several proportions p, vary exactly as binomial proportions with parameters n, and a common probability pbar then there is as much agreement among the judgments within the subjects as there is between the subjects. In this case, the value of kappa is equal to 0.

If each proportion pi, assumes either the values 0 or 1, then there is perfect agreement among the judgments on each subject. In this case, kappa may be seen to assume the value 1.

Note that kappa is not defined in cases of the proportions pi=0 or pi=1. 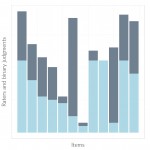 An example of 12 items judged by a differing number of judges where the colors indicate their respective ratings.

Consider the picture on the right. Imagine you have 12 items which were rated by several judges. In the plot you see the items on the x-axis (one bar per item). And on the y-axis we see how many judges rated each item (indicated by the height of the bars) and their rating (as the different colours of the bars).

If we want to know the chance-corrected agreement among these raters, we use the above mentioned kappa. Here, the inter-reater reliability equals

This is considered a low average agreement. Values of kappa above .60 are considered high. Graphically you can see this when you look at the large proportion of half-light and half-dark bars. There are only few bars which are either mostly light or mostly dark. 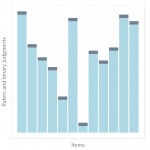 An example of 12 items where the proportion of judgments are high across all items.

Next I set the proportion to be equally high across all the twelve to-be-rated items. I simply set the number of “light” ratings by the judges such that all but one judge agreed on “light” for each of the twelve items you see on the right. Initially I expected, that kappa should be quite high, because most of the judges agree about which category the items belong to.

What is happening here?

Recall the properties of kappa:

If there is no intersubject variation in the proportion of positive judgments then there is less agreement (or more disagreement) among the judgments within than between the N subjects. In this case kappa may be seen to assume its minimum value of -1/(n-1) 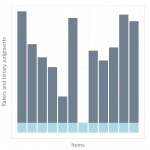 An example of 12 items where the absolute number of “light” categorizations is constant across items.

Now, let me consider raters where for each of the twelve items, the same absolute number of raters said “light” category. The corresponding pattern is illustrated in the graphic on the right. We see twelve items, one in each bar, rated by unequal numbers of judges, but the same numbe of judges (in this case: 3) agreed about the light category.

Here the kappa value computes to

which means – according to Fleiss & Cuzick – low agreement. This makes sense to me. 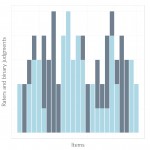 Now I will consider a sample data for which kappa turns out to be close to good agreemen. Good agreement means kappa is above .60 (see Fleiss & Cuzick). The example consists of 25 items judged by a total of 81 judges of which not all judges judged the same set of items. There were two categories from which the judges selected. We see that some judges showed complete agreement for some of the items, e.g. the first and the second column being single-colored.

Here the kappa value computes to

which means – according to Fleiss & Cuzick – moderate agreement.